Art that Takes You Back To Another Time

Gamma World is the second RPG I ever owned (after Tunnels & Trolls) and has a special place in my heart, so I think Mutant Future is cool.

Malcadon's art is hard to classify. Because a lot of it is simple pencil sketchwork (sometimes even on blue lined paper! Now THAT takes me back to middle school) it has a very amateur, fan-art vibe to it, but if you go through the whole collection you'll see that behind the often amateurish look and adolescent glorying-in-violence-nakedness-and-weirdness is a good grasp of anatomy and proportion, perspective, composition, color, and all kinds of good art stuff. So there are layers here.

As a matter of historical fact, the original Gamma World never had this kind of DIY look -- it was largely slick-as-hell David Trampier inkwork. So putting Malcadon on illustration duty for Mutant Future isn't an accurate homage to Gamma World in particular, but it's very much an appropriate shout out to the late 70s. Malcadon's no Trampier (who is? Tramp was one-of-a-kind) but his work is often reminiscent of David C. Sutherland, for example.

(Note -- when I talk about "amateurish look" I'm trying to be descriptive, not judgmental. I'm talking about a style, not a level of skill. Just want to be extra clear on that.) 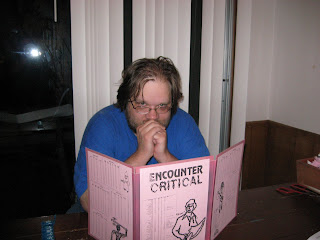 Thanks to a gift from Rondo, Mesmerator of the 65th Quadrant, I am now prepared, should I need to run Encounter Critical at any time.

Chris Goodwin is producing a retro-clone of The Fantasy Trip called Warrior and Wizard.

That is sweet. The Fantasy Trip was always an awesome, tight little system. A lot more in common with my beloved Tunnels & Trolls, say, than with D&D (though TFT is comparatively rules-heavy). It seemed a shame to me that TFT drank the Champions kool-aid and morphed into point-based GURPS.

Plus Wizard had the creepiest cover EVAR.

Apparently the first version, which I never saw, was not so obviously the product of a bad drug trip.

I was reading an old Dilbert book yesterday and ran across this strip.

Is it just me or is that the first edition AD&D player's handbook cover demon? 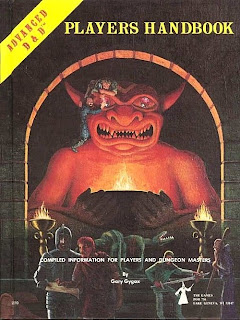 (Hotlinking to Grognardia's copy of the image here... it's all on Blogger's servers, right?...)

Ed (moi) now has a deviantArt account. Not much there yet.

And Adam Black just got one too! Much more stuff there.

Did I mention Joe has a dA account too? :)

This post contains spoilers for The Keep on the Shadowfell, though not many. Consider yourself warned.

The other night I ran my second game of D&D 4. I'm running The Keep on the Shadowfell, with some changes. The big thing is that I'm scaling the encounters down in power a bit since I only have 4 players. The first game I ran I did not lower the encounter levels and it was rough. It was just the kobold ambush encounters, but they were overly harsh.

Bram, human wizard; Lyssa, eladrin cleric of Corellon; Ander, dragonborn rogue, found as a hatchling by halflings and raised by them; and Ivy, human fighter.

I used the "missing mentor" hook and personalized it by saying that Douven, the mentor, was Bram's uncle, and that his aunt Greta wanted Bram and his friends to find her husband. They went to Winterhaven, encountered the aforementioned kobolds and befriended some locals, most notably Valthrun the sage.

Ander, the dragonborn rogue really got to shine this time around.

The group were heading to the dragon burial site that Uncle Douven was thought to have gone to. Once at the location, they heard many voices, and Ander snuck up to the site. It was a group of human thugs led by a gnome.

(I had decided to remove the guardian drakes and add more human rabble.)

Ander was on fire with his stealth and athletics, sneaking and sliding down the slope into the burial site, but he stepped on a large dry branch, giving himself away. The jumpy gnome shot at him with his crossbow, a warning shot. Things were looking bad for Ander. A fairly large group of club wielding thugs surrounded him. Then he started to shovel the BS.

He told them that he was on a pilgrimage to visit the grave of one of his ancestral dragons. The thing is, Ander's bluff score is pretty crappy, +1. But, he pulled off a great roll and the gnome was not insightful enough to see through Ander's lies.

Ander knelt down next to the grave and began chanting in draconic. Bram, the wizard, knows draconic (Ander determined during his bluff that the gnome did not know the language by saying something to him in draconic and the gnome giving him a blank look). Ander began covertly telling Bram how many opponents they had, how they were armed, etc. Brilliant! Bram then used the Ghost Sound cantrip to relay this info to Ivy, who then whispered it to Lyssa.

Lyssa, our high perception eladrin, heard the gnome tell one of the thugs to kill this chanting fool so they could clean out (they had found what they were looking for), so Ivy shot the gnome with her short bow and all hell broke loose

It was cool and tense with Ander surrounded by thugs trying to bluff. The whole time he had a shuriken hidden in his hand, just waiting to throw it. In fact, once the shit went down, in one turn, he unleased his acid breath, killing two of the humans and using the shuriken to kill another with a throat shot.

The halfling slinger. who had been hidden the whole time finally revealed herself and started raining sling stones down on the adventurers. She did quite a bit of damage, and eventually escaped unscathed. Now I have a foe that might be back someday to try and get revenge on the group.

The gnome was shot a few times by Ivy, then Bram unleashed his Flaming Sphere, frying him. Lyssa finally finished him off with her Lance of Faith while he tried to escape.

Uncle Douven was rescued and the group has a few clues about the Cult of Orcus and the rift of the Shadowfell, but first they have been asked by Lord Padraig of Winterhaven to help stamp out their kobold problems, which is where they will start next time around.

All in all, I think this session went better than the first one. The first time out, I was trying to juggle and teach the rules, and rushed through things to get to encounters. This time I took it slower, had a lot more interaction with NPC's. Also, lowering the difficulty of the encounter helped a bit. The PCs still were taking some serious damage, but it wasn't completely overwhelming.

I'm really looking forward to the next game.
Posted by Joe at 12:20 PM 2 comments:

This makes me want Danger Patrol even more than I already did.
Posted by Joe at 5:07 PM No comments:

OD&D as the Gom Jabbar

Geez, I've been really digging the whole "retro-roleplaying," back-to-Old-School-OD&D movement, but if it encourages this sort of shit, if that's the attitude that people involved bring to the table, count me out.

It's like a bad parody of a Frank Herbert character.

Holding up old school OD&D as some kind of paragon of deep creative human activity, for the few true humans among us, who rise above all the rest (he didn't quite get around to using the word "sheeple") and shun mere "fun" because we want to work HARD for our gaming DAMMIT! FUN IS FOR THE WEAK AND FEEBLE OF SOUUUULLLLLLLLL

Via Retro Roleplaying, who linked it mostly approvingly, via various google searches on Labyrinth Lord and Swords and Wizardry.

Grognardia has begun a series on the history of art in D&D with discussions of three Player's Handbook covers: understandably, for a blog called Grognardia (but I think he justifies this assessment cogently), he considers the AD&D PHB cover the Best Cover Ever; he moves on to the revised cover of the same book, which came out I guess in 1983? -- and moves on to the 2nd Edition cover.

I was never a real grognard in the sense that I played old school D&D for any extended period of time; I played Tunnels & Trolls. However, I did own the AD&D books, and I had friends who played D&D who I played with sometimes. And I guess I bought mine pretty early and so did my friends, because the oldest AD&D art is what I associate with AD&D. I couldn't have told you what was even on the "revised cover" AD&D players' handbook, and 2nd edition D&D -- well, I was never a big D&D fan to begin with, and by the time 2nd edition came out I was playing other things.

So not out of loyal old-school grognardism, but just from being out of touch, my mental idea of what D&D is is extremely old school (but not ultimately super-old school, because while I owned a copy of white-box OD&D, I bought it as a curiosity, not because I knew anybody who played it).