Tony and the Worm...

Mr. Tony Dowler is inching closer to releasing The Purple Worm Graveyard, a Dungeon World adventure for which I did some pleasantly disturbing art (NSFW). If you aren't following his blog, what's wrong with you?
Posted by Ed H at 1:06 AM No comments:

Learn the tale of the first ever (as far as I know!) Amber roleplaying game, largely undertaken by (snail) mail, created by Ken St. Andre, while in correspondence with Roger Zelazny. And how it affected the production of the cover of City of Terrors. From Liz Danforth's blog.

Amber references were *rife* in places like Sorcerer's Apprentice (which also carried a number of original Zelazny stories!), but I was a kid and didn't have access to much of a bookstore, and didn't know to look for Amber in the library, if it was even available there, so most of it went right past me. It's only later on, late in high school I think, I got ahold of the Amber books, in the form of a hardcover collection that I was given by a friend of the family who devoured science fiction books from his book club like candy, and gave them away when he was done (unlike candy, I guess).

Chroniclers of the Old School ways take note -- this woman tells good stories. :)
Posted by Ed H at 1:41 AM No comments:

This is not of course an "old school roleplaying" blog, just a blog written by old, old roleplayers. Hell, one of us regularly runs and plays 4th edition D&D. But I can't help admiring the Underdark Gazette's fiendish, if sexist, plan to increase visibility of the Old School Rules movement by means of hot elf chicks. (Or hot chicks of whatever demihuman persuasion you prefer.)

So -- consider this a standing offer from me, Ed, of your very own hot demihuman chick drawing for anybody looking to participate in this fiendish plan on their own blog.

Unless I'm in an artistic slump, in which case the drawing may be delayed, or may kind of suck. But lately the muses seem to be with me.
Posted by Ed H at 2:26 PM No comments: 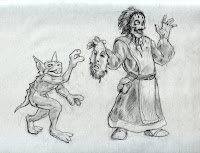 So Jeff Rients dropped a couple spells in his blog, and as I read it I knew I had to draw at least one -- the Face of Terror. Took me a long time to figure out how to draw it so it was clear (to me at least) there was a theft going on; turning the action 90 degrees so the figures were clearly separated did the trick.

Don't think for a moment I didn't consider a Brood of Sin illustration too. But this was enough creepiness for one day.
Posted by Ed H at 1:19 AM No comments: 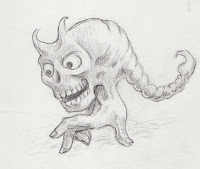