I've been mulling around an idea for a Sorcerer game.

Demons (aka imps) are little projections of id-charged ectoplasm from another universe, who can be brought into ours via various ancient rituals. The rituals, and their names, are all old school and traditional -- magic circles, abracadabra, names from the Goetia, the whole nine yards. But the demons, once they're here, have quite modern tastes and attitudes. They tend to be a bunch of little vulgarians, perhaps with Needs for boozing or getting high, cult movies or gambling, sating themselves at all-night buffets, or what not. But of course they're bursting with arcane power.

I'm thinking of two different kinds of Sorcerers, primarily. The NPCs are going to include a bunch of pretentious sorcerous weenies, people you love to hate. A grim gothy sorcerer lord, an ancient bearded cultic badass, and so on. The PCs are going to be primarily ordinary schmucks who happen, by design or by accident, to have gotten access to the old traditions of sorcery and gotten involved with them. It'll be kind of like "play yourself as a sorcerer," but not literally yourself, just the sort of person you might know and hang out with if they were real.

Anyway, I've been thinking about this for a while, and started doing a little demon concept art last night. 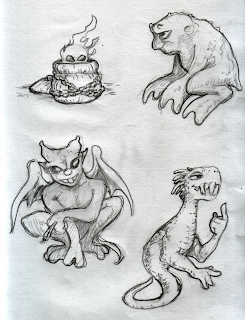 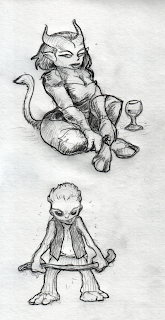 I have dibs on the flaming-head in the pot!

Let me know when you want to run it.

You can't go wrong with Bode or Rackham as inspirato. I also suggest Willy Pogany!

Can you imagine the sound of purring combined with a Harley revving? That's the sound of me thinking about playing in this game.

That demon girl is awesome. I love her.